The Boys, Girls and Masters all returned victorious from the Head of the Riverfront in Hartford last Sunday, returning with 7 medals: 3 golds, two silvers and two bronzes.  With over 700 boats entered, this regatta was more than twice the size of the Tail of the Fish, and featured crews from all over New England and New York.  Fortunately, the weather was much nicer than last year, making the 2.25 mile race course not quite as daunting.

The silvers were won by the Boys’ 4x and the Masters’ Mens’ Novice 1x, while the bronze medals were won by the Girls 1st 4+ and Girls double.  The coxswains did their part to help bring our programs closer together, with the Boys’ coxswains contributing to both the Masters Mixed 8+ and the Girls’ 1st 4+ medal.  The Masters Mens’ double came in third in raw time, but fourth on an age-adjusted basis. 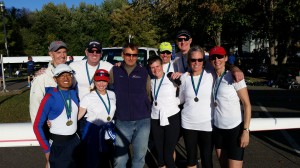