Norwalk River Rowing finished the season on a strong note at the Head of the Schuylkill, winning six medals.  The regatta featured 1,614 boats from 230 clubs and seven countries (Australia, Canada, France, Germany, Great Britain, the Netherlands and the USA) in a 2.5 mile race ending down by the storied Boathouse Row in Philadelphia, PA. 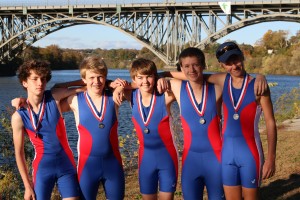 a good sign for the future, the Novice 4+.  The final Youth Boys’ medal was a Bronze in the JV 4+.

The Youth Girls were just out of medal contention in a number of their races in this very competitive regatta.  The girls took fourth (Clark) and sixth (Vacas) in a field of 24 Varsity Singles and seventh (Clark and Castro) in a field of 38 Varsity Doubles.  And, in a good sign for the future, a Girls Novice Double (Luppino and Wiener) took fifth out of 12.

The Mens’ masters 4x (50-59) would also have finished just out of medal contention in 4th with their time in a field of 13, although they were scored as in the 40-49 category where they came in second.

The programs now move indoors for winter training, with the next test for the rowers being the Connecticut Indoor Rowing Championships on January 25, 2015.  Sign up now for indoor training to work on getting that erg score down!